That's right!! They came before the Cambrian1 This means that these awesome biota are precambrian!!
so how are they around? well I'll tell you

In the Cryogenian; the whole world was froze - not very good!! There were no edicarans here so dont worry. This was called the snowball earth" because the hole earth was icy like a snowball
then, methane (greenhouse gas) went from the polls and this warmed up the world so the ice metled. this also made the climate perfect for multicellula

In the start of the Edicaran, there were no Ediacara biota. Surprising! But you need to forgive them, the whole world was only just frozen; life was probably cold back then
but, 3 million years later, is when they found the first fossils: these were called "embryo" and they looked like embryos! kind of like baby edicara
then, another 20 million years later, some new types of ediacara started showing up. thes ewere called Nimbia, and arround aned flat with a central dimple. they are the blue ones on the right hand side of the photo on the bottom of this page.

Eventually, the Ediacara biota went extinct and the cambrian biota took over. But wy? Well there are some theories by scientists wh this might have hapened:
Or was this the end for our ediacaran friends?? this awesome scifi story by J.R. says that they might not be extinct, but hiding underground!! so cool. I hope that they'r still around, I would love to meet an ediacaran one day. probably not but if they wer... 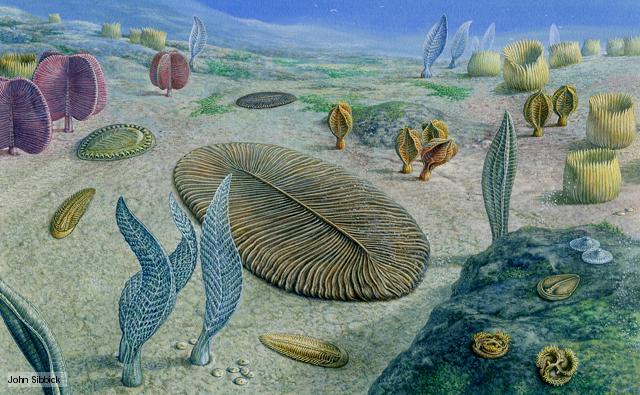 A family photo of the all of the Ediacara biota.
Features Dickinsonia, Spriggina, Nimbia, Charnia
See if you can spot them! A prise if you send in the right answers to my website or if you see a species that i haen't!!